The spectacularly named UK game development studio Boneloaf was formed in 2011 by three brothers: James, Jonathan and Michael Brown. The company was formed as part of the DigitalCity Fellowship in Sheffield, South Yorkshire, which was set up to support companies working with digital technologies supported by the European Regional Development Fund and Teeside University. And if you haven’t heard, its title Gang Beasts is preposterously, infectiously fun.

As is often the case, the roots of Gang Beasts grew from self-imposed limitation. The team prototyped a number of games referencing clichéd scenarios from genre films, high fantasy games, space operas and urban crime thrillers. “From these prototypes, we decided upon the urban crime idiom: the key mechanics were significantly less complex to implement, and the rectilinear geometry of the built environment could be approximated and optimized with modular structures,” says Boneloaf’s James Brown. The initial test scene was informed by arcade melee fighting games from the late 1980s and early 1990s. Think: Capcom's Final Fight, Sega's Streets of Rage and Golden Axe, Konami's Crime Fighters and Teenage Mutant Ninja Turtles, and Taito's Double Dragon and Renegade.

Support for multiple players – which has become part of the game’s core appeal – was added only when the character control scheme was implemented, to make a scene for testing and prototyping the key fight mechanics. “Fighting in the test scene (itself a crude backstreet with low lighting) was fun but limited, as the scene had a single character model and few other assets,” says Brown. When they added the grab-an-enemy and object-targeting mechanics in the next build, however, it came to life: “We saw immediately that the prototype could be the skeleton for a fun party game, and went from there.” 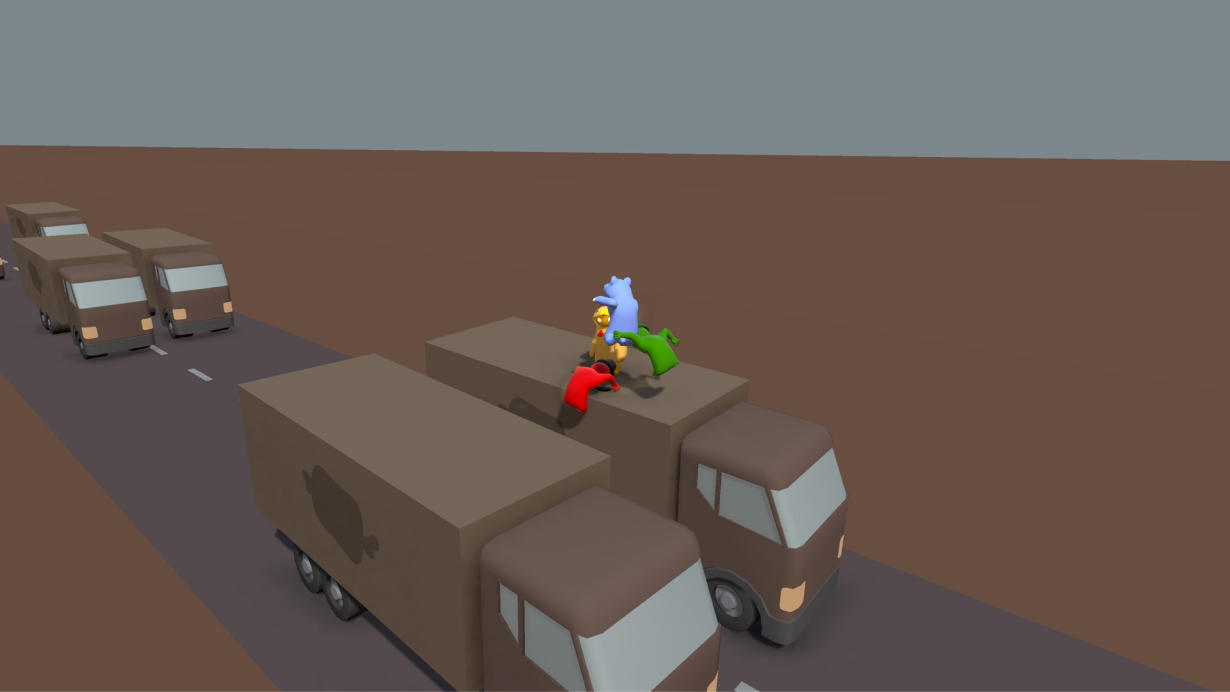 The team made the playable pre-alpha builds of Gang Beasts public before so much as committing to an aesthetic. “In the months immediately after we made the pre-alpha builds available, we had a series of conversations with attendees at gaming events, and read a glut of comments on IndieDB, Steam, Facebook, Twitter and YouTube, suggesting that the severe game assets and sparse color schemes could be the default art style,” says Brown. These conversations and comments have informed the untextured and reductive look of the current builds, which is superficially revised from the sample assets that were made to populate and structure the pre-alpha builds. Currently, the team is experimenting with the geometry of key assets and various material and lighting configurations – specifically physically-based shading and global illumination in Unity 5 – to give more scope for visual complexity and differentiation without the use of textures. Brown says the aesthetics of the finished game will not be significantly modified from the current implementation.

The miscellaneous game prototypes that have been developed thus far by Boneloaf were made by the three Brown brothers alone. The bulk of development occurred when they could take time off from our various work and education commitments to meet and work on a Game Jam or other prototype; they started collaborating with the illustrator Jason Pugh in the months immediately before releasing the 0.0.0 public pre-alpha build. Two of the brothers, James and Michael, moved to Sheffield, where Jon was based in April of 2014; Pugh left his previous employer and moved to Sheffield to work full-time with the team in July. The sound and music design has come from Robert Larder, while a second sound designer and musician started working in collaboration with Larder. 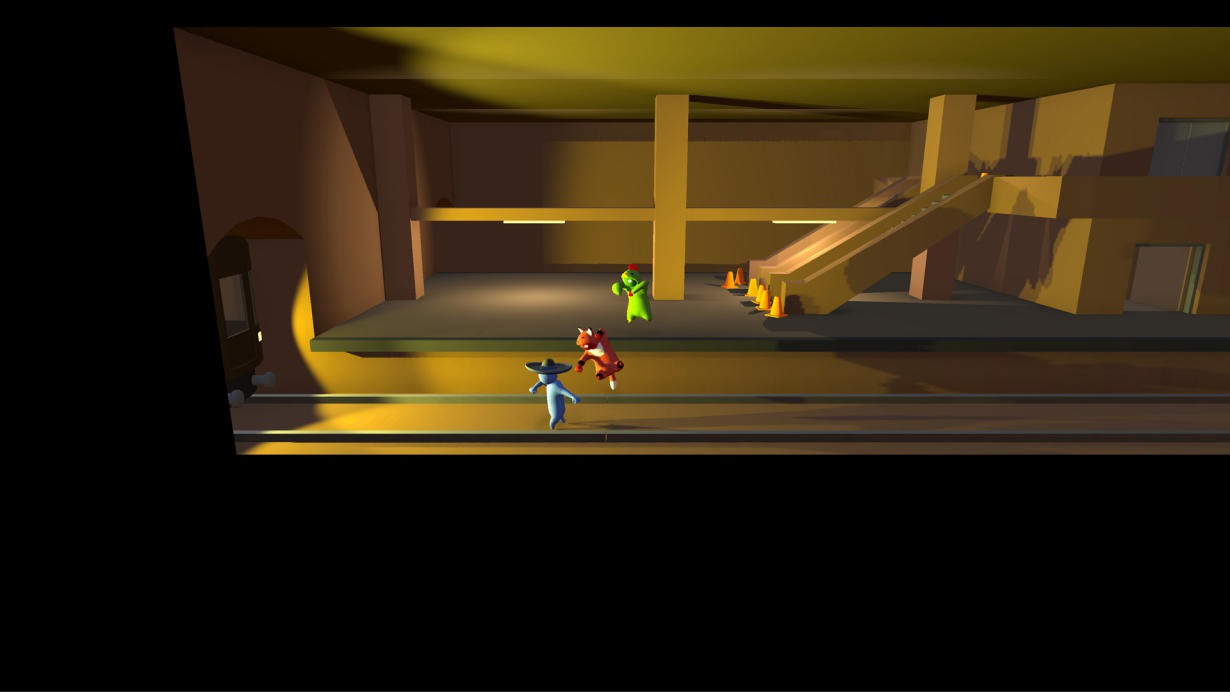 Boneloaf started actually earning income as a company in October 2014 (from the sales of Gang Beasts on Steam Early Access), and have started the process of identifying the key development and company-specific tasks that they want to have more support for. (This led to the addition of a second sound designer and musician, as well as the addition of a fifth member of the company, to work on various task relating to support and game development.)

Boneloaf purchased a single full Unity license in 2011, after making some limited but successful prototypes with the free version. “We experimented with a number of engines and workflows, but prefer the immediacy of working in the Unity editor as it supports experimentation and iteration,” says Brown. “We made the Gang Beasts prototype to test the character system we were making for the high fantasy and space opera game prototypes, with less complex key game mechanics. We committed to making Gang Beasts our first commercial game soon after adding the punch mechanic to the character system.” 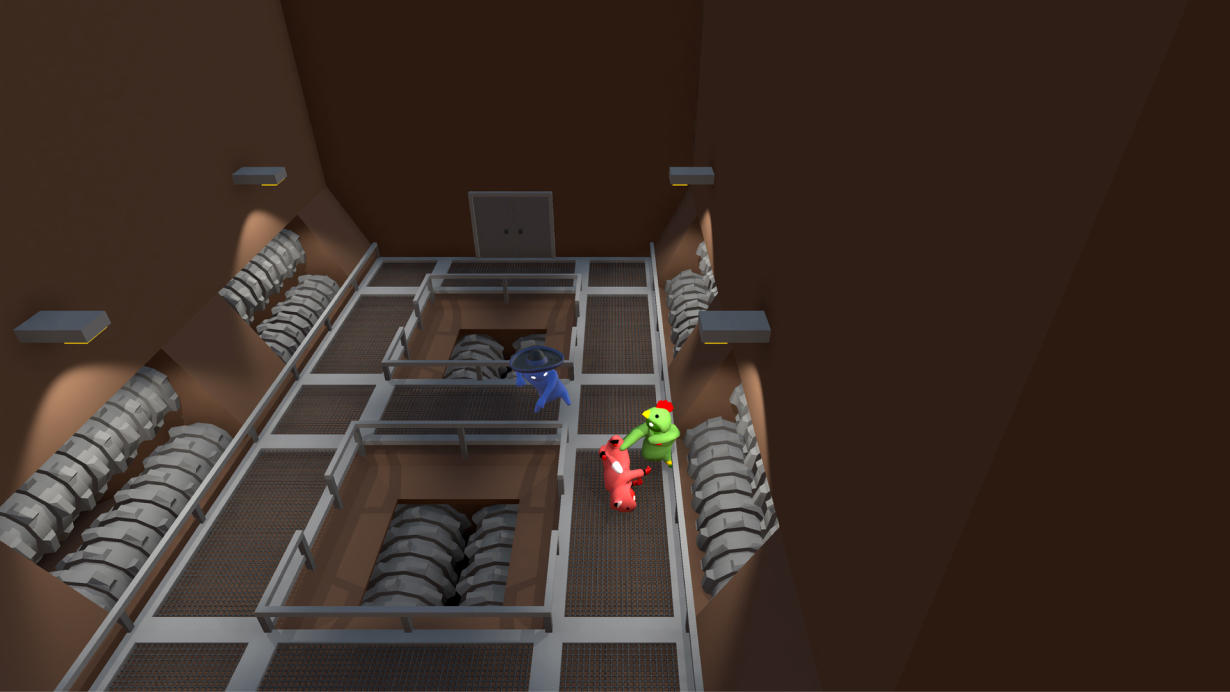 Gang Beasts makes extensive use of Unity's PhysX implementation, seeing greatly improved performance with the PhysX upgrade in beta builds of Unity 5, and the team makes frequent use of the performance monitoring utilities (specifically the profiler and frame debugger), as well as the Unity documentation. As mentioned, the team expects to make significant use of physically-based shading and global illumination in coming builds. 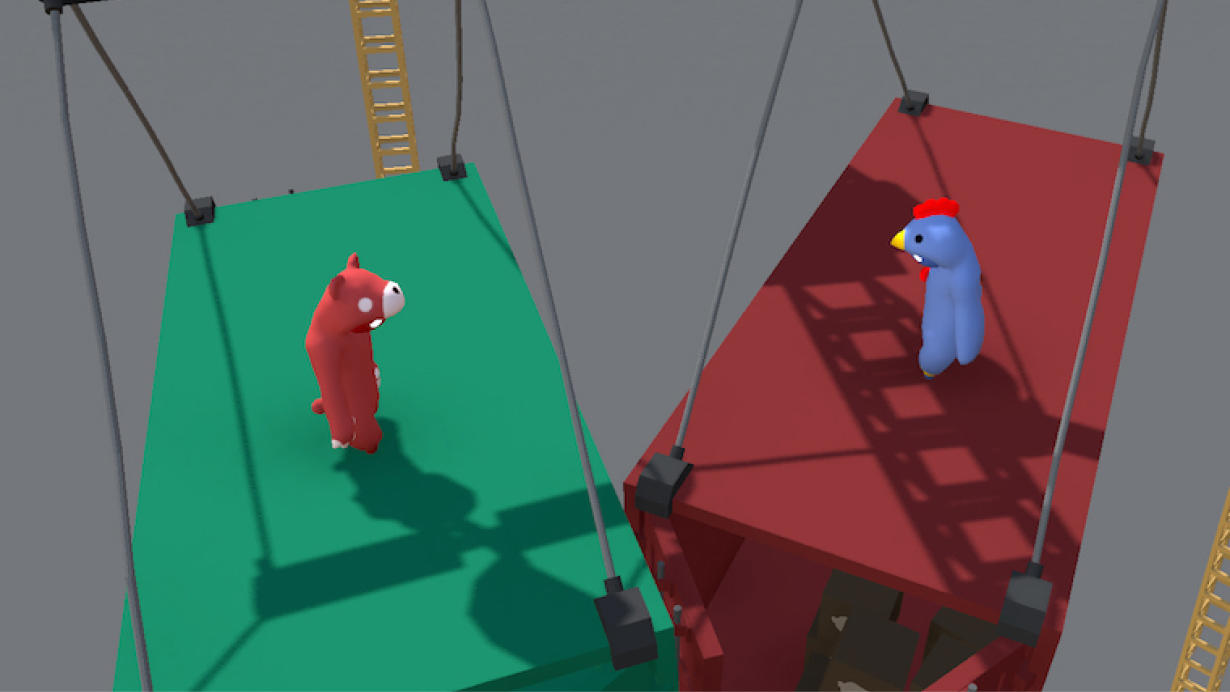 As the names of both the studio and its game perhaps belie, development has been fraught with absurdity. “There have been a glut of ridiculous and hilarious in-game occurrences that have happened whilst making Gang Beasts,” says Brown, noting that team members have shared a number of them through their individual Vine and Twitter accounts. It’s often as helpful as it is entertaining: “There have also been many surprising and unexpected Gang Beasts gameplay sequences that we’ve seen in YouTube videos, at gaming events, and in the office that have significantly informed the development of the game,” he says.

As far as challenges, Brown says that the key limitation has simply been making the time to work on the game. The Brown brothers going full time in April meant going without an income, and as interest from players, press, publishers and gaming events was escalating, they had to modify and refactor the pre-alpha build to make a stable base for the full game. The need to be available for interviews, events, and meetings with publishers and platforms holders also proved draining. Thankfully, with the income they’ve recently started earning from Steam Early Access, Boneloaf has been able to purchase software, equipment and furniture to improve its office and workflows.

"At the current stage of development, the only property or quality of the game that we are satisfied with is the sense of fun that it can trigger in players," says Brown, pointing specifically to its ability to provoke silliness and infectious laughter from players. The most complex and difficult feature of the game to implement to date has been the character movement physics; there are no preset animation sequences in the game, which, according to Brown, "can force significant modification or refactoring of the character movement scripts to implement additional character movements or states."

While Windows, Mac OS X, and Linux are currently the officially announced platforms for Gang Beasts, the team is in a series of protracted conversations with the likes of Amazon, Nintendo, Microsoft and Sony about making versions of the game for their respective consoles. And if early response is any indication, we’d be shocked if it doesn’t land on a bunch of them. 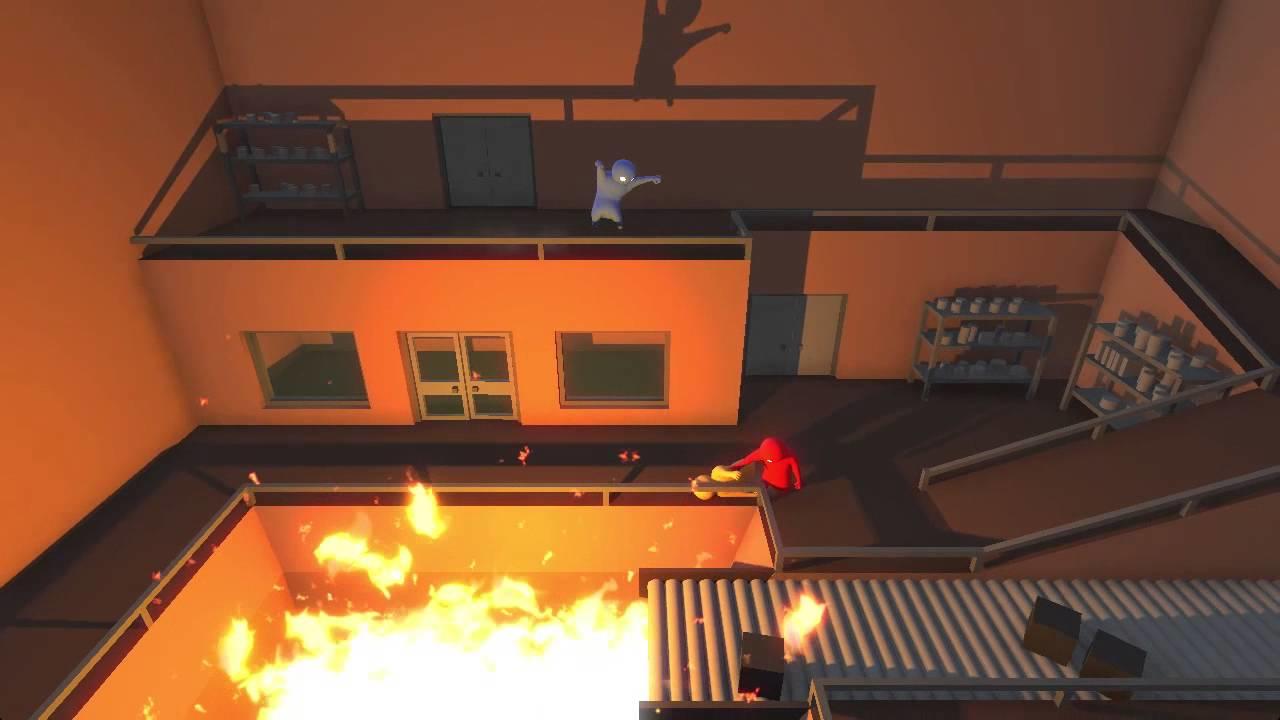 “We planned to develop a series of high fantasy game prototypes we had made, provisionally named Grim Beasts, as the first commercial Boneloaf game,” recalls James Brown of his studio’s early days. But they were anxious that the complexity of some of the key features planned for the game – specifically a physics based magic system, bladed and ranged weapon use, and complex AI and animations for miscellaneous limbless, multi-limbed, gigantic beasts – would take significant resources to implement. To reduce the complexity, they made three less involved prototypes with the character scripts from Grim Beasts (a space opera game, a melee fighting game, and a platform game), and two of these games had the word “Beasts” in their working titles – and there it was. “From these prototypes, we committed to making Gang Beasts the first Boneloaf game,” says Brown.

To bring Gang Beasts to life, Boneloaf has selectively used scripts and tools from the Unity Asset Store for rapid prototyping and editor customization. Key tools that were used in the pre-alpha builds were Marmoset's Skyshop, as well as ProCore’s ProBuilder and ProGrids (these tools have be removed from the Unity 5 build, as the team has revised and modified the previous workflow. They've also made use of various input frameworks – cMonkeys' cInput, Gallant Games' InControl, and Guavaman's Rewired – to extend Unity default input scheme, and implemented a small number of visual effects with CamelotVFX's Fire & Smoke prefabs, and Arcadium Playware's Impact Deformable script.