Hitman Go is a game that seemingly appeared from the ether, gaining overwhelmingly positive reviews on an unexpected platform: mobile. Released in May for iOS and Android, Hitman Go puts players in the familiar shoes and suit of Agent 47, still with the shaved head and barcode tattooed on the back of it. Mr. 47 is once again flying all over the world, heading to various exotic locales. It's still a game about being an assassin and it's still a game about being diligent, precise and methodical, with your ultimate goal being the perfectly executed kill. Here, however, those exotic locales take the form of boxed dioramas, filled with tiny virtual figurines of guards, targets and NPCs. It is far, far cuter than anyone had imagined a Hitman game could or would ever be. 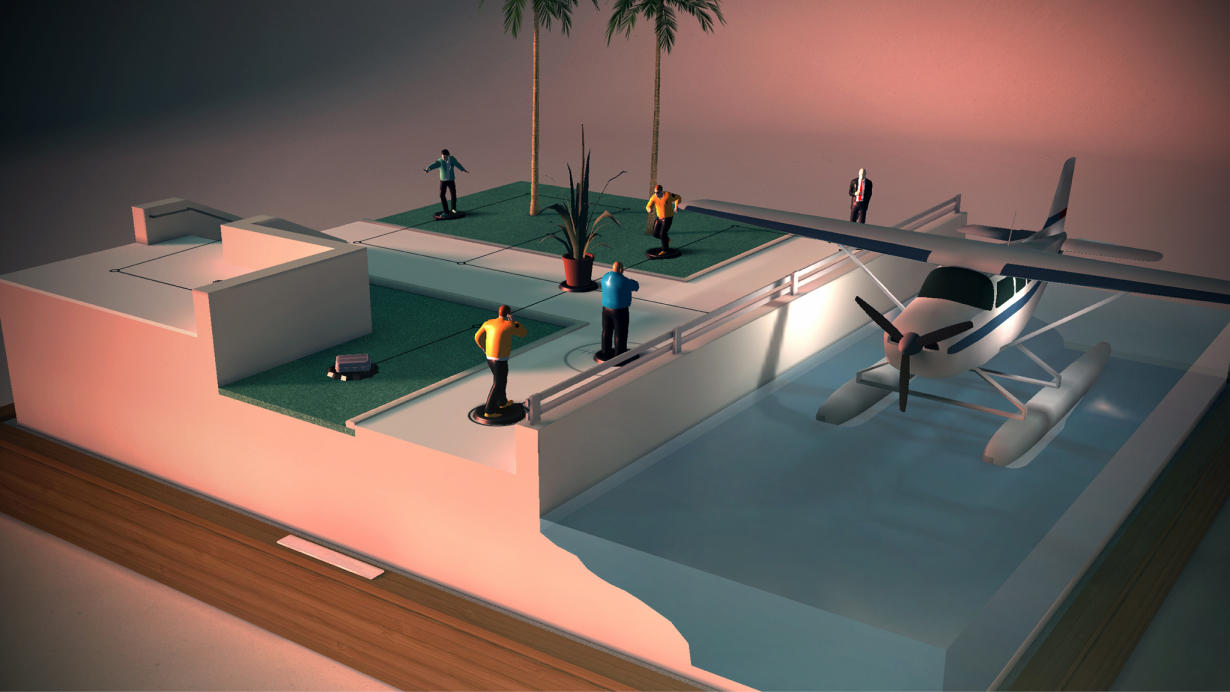 The other huge departure for the game, of course, is that it’s turn-based. Players can move their 47 piece one space up, down, right or left per turn; moving into an enemy in any direction other than the one they're facing will kill them. Some boards include rocks or weapons for 47 to use (for distraction or murder, respectively). Oh, and equipment must be used on the turn it's activated, meaning that unlike the Hitman games, you can’t simply carry it around until the time is right. Each scenario is a puzzle, some of which are forgiving and some of which have very specific solutions. As has been a staple of the series, presentation is key as well. The isometric, fantastically clean visual style stands out from the crowd, and aurally, each box is essentially a series of levels that move you through a narrative without voices or character noises. All you hear is ambient noise and an understated musical score, and the result is one of the more memorable audio-visual environments we’ve seen in a mobile title. It’s minimal, atmospheric and highly effective – an abstracted rendition of a popular franchise, pared down to its bare essentials. 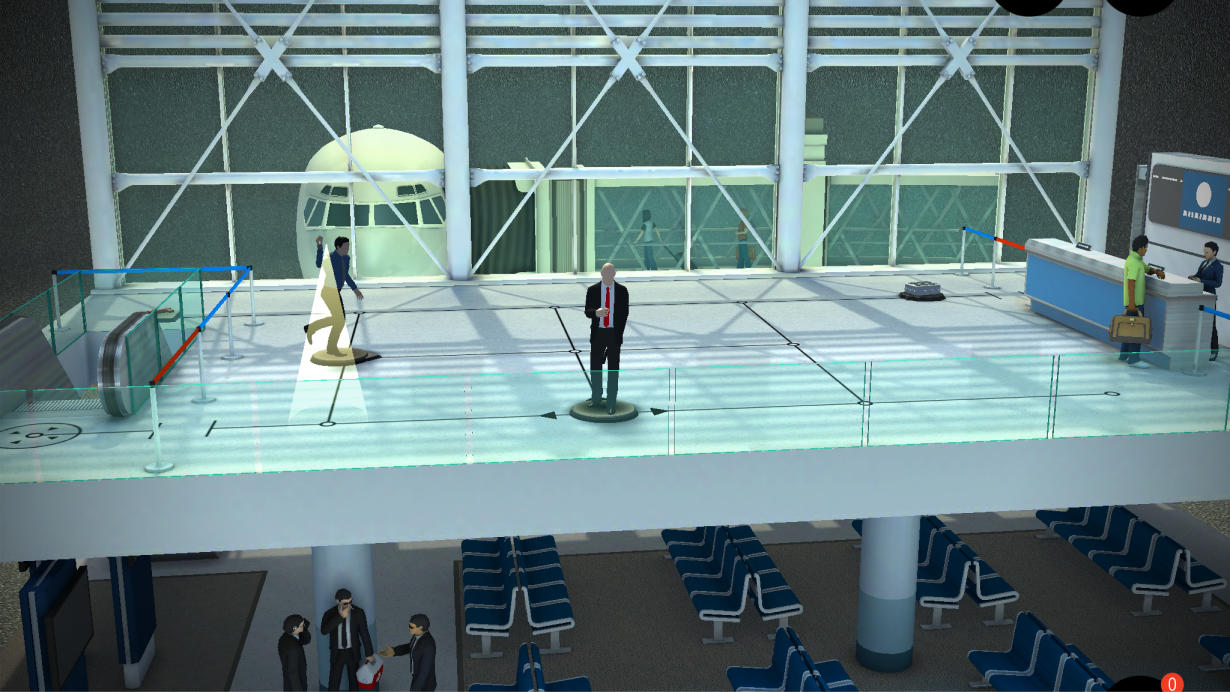 Indeed, story is not the point here; it’s not even one told indirectly through the environments. “We wanted to make a game that is a natural fit for mobile devices,” says brand manager Geneviève St-Onge. “Usually, Hitman games are played on PC or consoles, where story and dialogue are the common way of telling a story. Because people play short sessions on mobile devices, we wanted to make a game that could tell a story without a heavy narrative structure.” For the vast majority of the project, the Hitman Go team was very small. There were just four developers on the project from the concept phase through to production, and the team then peaked at 11 developers to complete all the levels, wrapping things up and pushing the game to the store. “Coming from different studios across the world, we combined our efforts to create what would be the first mobile game from the Square-Enix Montreal studio,” says St-Onge. “It was a great challenge because practically none of us had worked in the mobile industry before.” 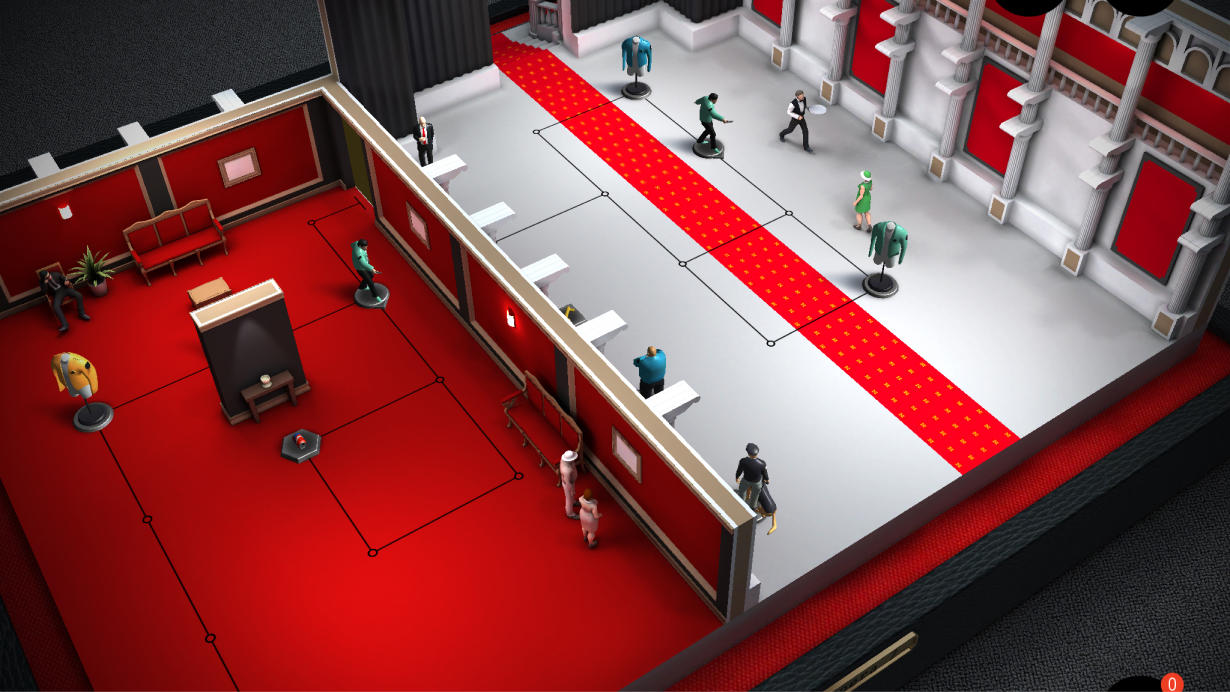 For this reason and others, the choice to bring the franchise to mobile using Unity was made rather quickly. “We looked at a few other engines, but almost immediately we decided that Unity was our engine of choice for Hitman Go,” says St-Onge. "The studio had really good experience using Unity in the past to prototype AAA concepts, and some of the team members had already used it for personal projects. The low barrier of entry and the support for all main mobile platforms made it a natural fit for us." 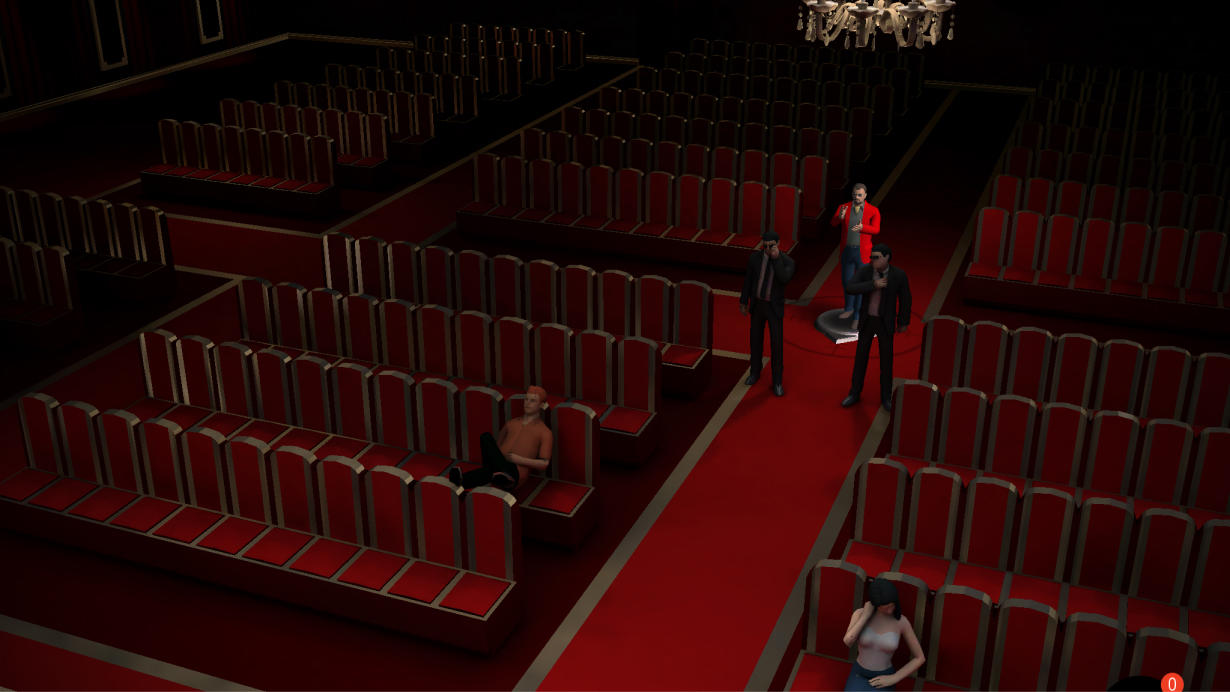 Indeed, getting the game up and running quickly was essential, particularly given the game’s relatively short development time allotment. "It was incredibly easy to get things going," says St-Onge. "In a few days we had a first functional prototype and a light level editor, and after two weeks of work we were able to show a first version of the game to the rest of the studio... even though it was our main programmer's first experience with the engine!" After getting the basic mechanics of Hitman Go working, St-Onge says the team started to have all sorts of ideas for different mechanics. "It would be a lie to say they were all good, but we had to try. A lot. And I think everybody here really appreciated the speed at which we could implement and iterate on ideas using Unity. This really helped us in the process of selecting what we believed were the best mechanics for the game." 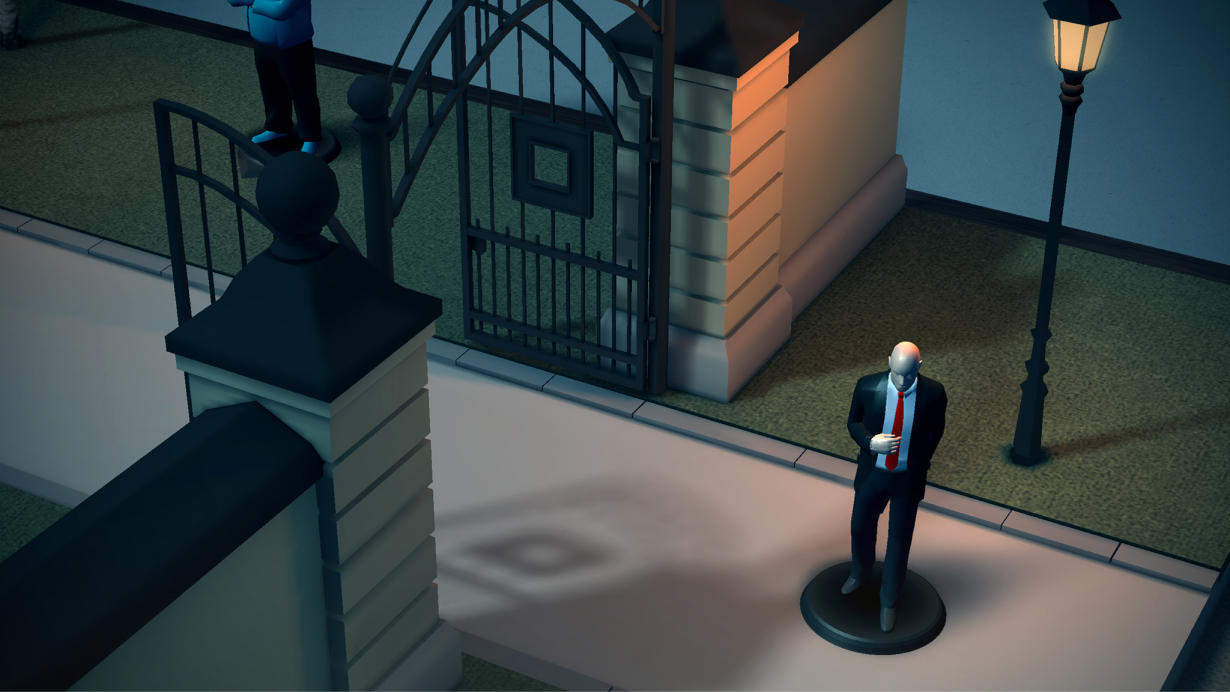 Hitman Go was the first mobile project for everyone on the team other than its creative director, Daniel Lutz, and opened many an eye to the upsides of working on a smaller scale project. "Having small teams allows us better ownership over the products we make," says St-Onge. "Everybody is involved, and is 100% dedicated to what they’re making – and they are not confined to their field of expertise." As a team, she says, they work together to find solutions across the board, from designers to artists to coders. The critical and commercial response to Hitman Go has been extremely strong, and the team has been pleased with the results as well. "We're very happy with the final product," says St-Ongle. "It's a departure from the original games, but we believe it stays true to the core values of the Hitman franchise. We were thrilled to see that players and critics liked our take on the Hitman universe." The suggestion is also that the game is likely the first of many like it. "With Hitman Go, we quickly learned the value of quality products in a crowded space such as the App Store," she says. "We nourish the idea of continually providing players with high editorial value within their favorite franchises." 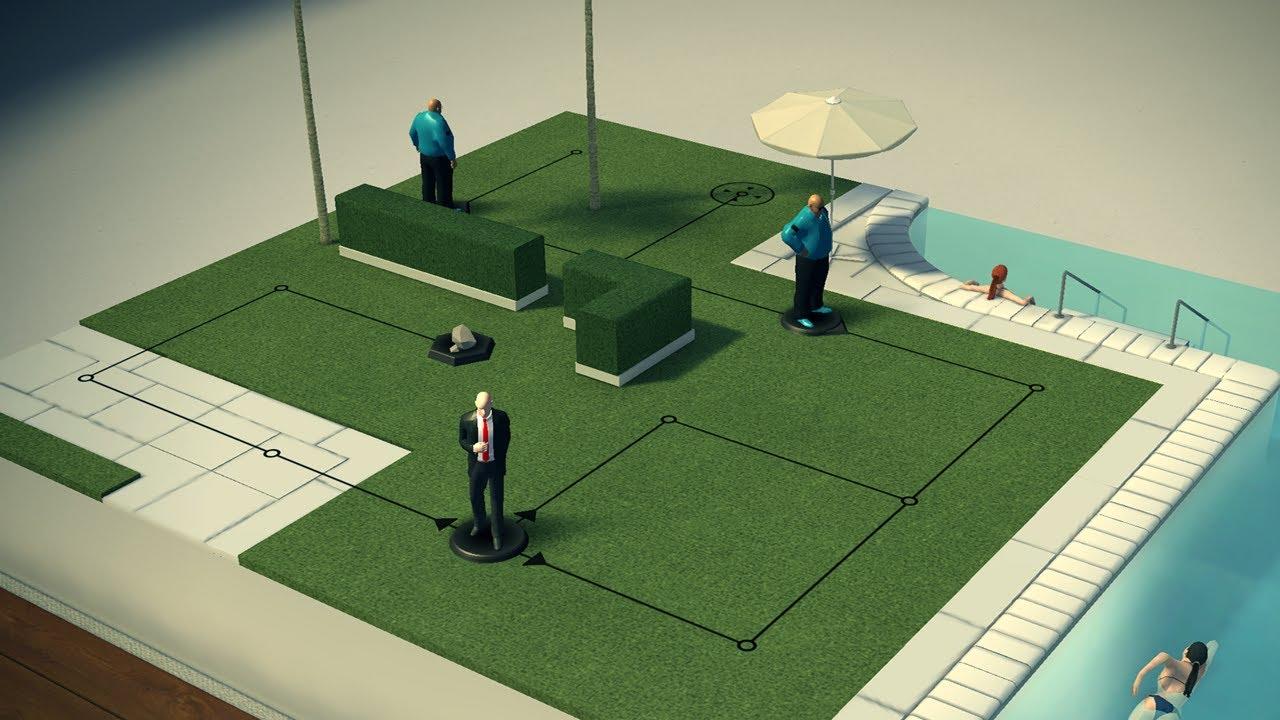 Eugene C. Jarvis was the sole character artist for most of Hitman Go. “Our characters were like chess pieces,” he says. “They had no animation on their arms and legs; they just moved like pawns on a chessboard.” To accomplish this, Jarvis built and skinned models as one normally would, but then instead of animating them, put them in poses that tell the story of who they are and what they’re doing, and exported these “snapshot” poses as models. They share a handful of animations that are used to move pawns or knock them down or off the board. “I built a library of posed characters for the environment designers to choose from, and let them pick which ones go where in the levels,” Jarvis explains. “Gameplay characters were placed by level designers, and background ornamentation characters were placed by level artists.” The team used color swatches instead of detailed textures, so most of the characters were able to share materials. “That’s how we were able to have so many different colorful characters without having a lot of draw calls, or spending a ton of memory on textures.”

Hand of Fate visual style comes from the mind of Shawn Eustace, art director at Defiant Development. “He’s steered the games vision from the beginning,” says Morgan Jaffit, pointing to the difficulty of driving both a realistic high fantasy in-game style, alongside the illustrative, wood-cut style for the game’s cards. “Working back and forth between these two disparate parts of the experience and making them feel like they belong to the same world was extremely important, and Shawn's managed to harness the skills of our seven person art team incredibly well,” says Jaffit.