Finding treasure in the Age of Magic, a graphics-rich RPG

How do a businessman and a software developer working at an improvised kitchen table in St. Petersburg, Russia go on to produce sophisticated social games and mobile RPGs with some of the best graphics in the industry? Meet Sasha Pavlov and Oleg Sysoev, who started Playkot Games in 2009. Since then, they’ve grown their team to 150+ by carefully combining the right people, adopting Unity, and implementing the right strategies to capture significant market share around the world.

A one-night hack leads to millions of players

The two Playkot founders got their start on VKontakte, “the Russian Facebook.” VK, launched in 2007, gained quick popularity and had over 4M users by mid-2009 when it opened its payment system for applications. Sasha and Oleg both saw that the social networking trend was exploding and that it was an opportunity not to be missed. Neither had gaming experience, but both were imaginative and Oleg knew some Flash, so they stayed up late one night and built their first game.

Why they chose Unity to transition to mobile

Predictably, their first effort didn’t work that well. But within a week, they fixed the bugs and posted another game that immediately attracted paying players. As the income stream continued, they added resources and started work on a new game. By August 2010, VK had grown to nearly 10M users when Playkot launched Club Life – attracting 2.3M players – more than 20% of all VK users – after just one month.

As Playkot continued to grow with titles like SuperCity and became one of the top-20 Facebook game publishers by revenue, they chose Unity to transition to mobile platforms (SuperCity Mobile is made with Unity) and keep developing social and casual games until they found an even bigger success with the high-quality RPG, Age of Magic. 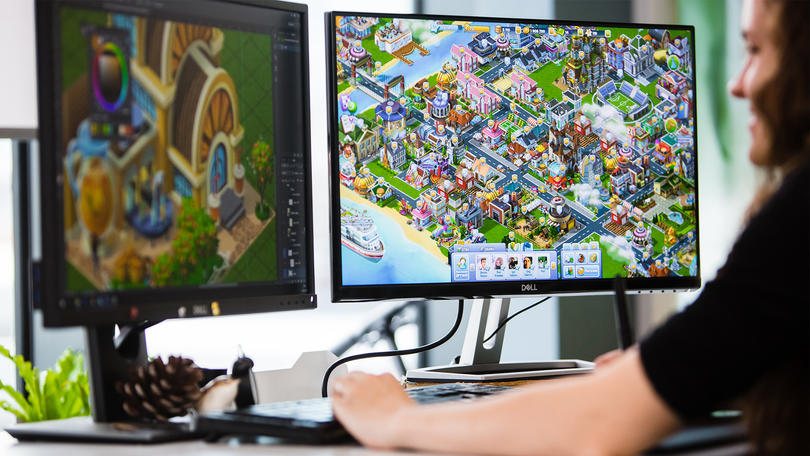 Not merely a Flash in the pan

Playkot’s evolution is similar to that of many Flash-based developers. In 1996, FutureSplash Animator (or “Flash” before it got acquired by Macromedia) let designers lay out vector-based animations on a basic timeline. It was a relatively easy-to-learn tool, and web developers could embed simple animations using a cross-platform viewer.

Flash was certainly Playkot’s primary development tool when they added Aleksey Guk, their first art director, in 2011. That year saw the launch of Pioneers and SuperCity as well as their first non-Flash, mobile-device effort: a dice game, Farkle Live, for iOS and Android.

According to Guk, one of the keys to Playkot’s success is their democratic creative environment. “My colleagues can bring to life any idea if it’s good enough. It doesn’t have to come from the art director or a lead – just being part of the team gives you a voice.”

The popularity of iOS devices, and Apple’s rejection of Flash, was significant for Playkot and most other game developers. HTML5, CSS, and JavaScript were increasingly important web technologies, and the founders of Unity had developed early versions of their gaming engine on the Mac OS. 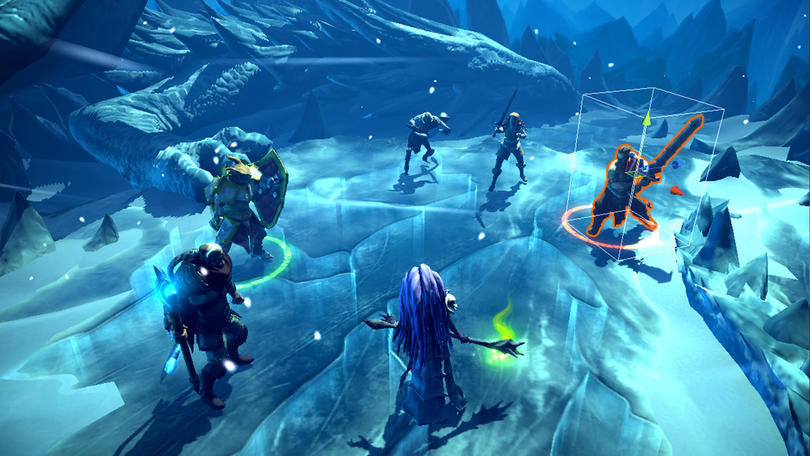 Making the leap to mobile

In 2012, mobile amounted for 18% of the video-game market, and through 2021 it will be nearly 59%, according to Newzoo’s 2018 Global Games Market Report. Correctly anticipating this shift, Playkot savored the challenge of developing for mobile platforms. While with their Facebook social games such as SuperCity they had developed considerable experience scaling servers and dealing with hundreds of thousands of simultaneous users, the mobile market required new skills.

According to Roman, “With mobile environments, the greatest challenge is in pacing and controls – it’s a different mindset than desktop apps.” Fortunately, in order to build Age of Magic he was able to find the right talent on both the artistic and technical sides in order to achieve their goal: a great game with fantastic graphics. “Our team features many ‘magicians.’ Nothing is impossible with them. If I see a brick wall, they just say, ‘no problem – we’ll go over or through it if we need to!’”

Putting their faith in Unity

Moving to mobile meant moving to a new development engine. The mobile market was extremely competitive and fast moving, so Playkot needed a tool that could quickly generate prototypes for testing as well as publish production-grade code for diverse mobile devices. The development teams knew the risks of making radical changes like this, and Sasha and Oleg had to calm their concerns.

After reminding the team that he was primarily a businessman not a developer, Oleg told them his first reason was, “It’s an honest, straightforward setup: we pay a license fee and if we start making millions, it’s all ours, not theirs.” Second, Oleg pointed out that the considerable pool of Unity developers (six million worldwide) would make finding the best talent much easier. Third, Roman said, “Unity includes all the tech tools we need to build the types of games we want to create. And we all think the Asset Store, with its thousands of game-ready resources, comes in very handy.” 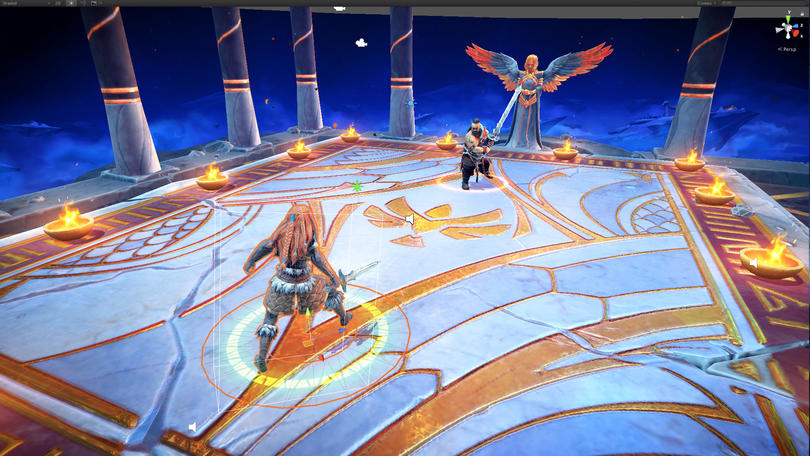 Having made the call to migrate to Unity, the team started downloading mobile games, carefully studying both UX standards and idiosyncrasies. They timed how long games took to load, how long they felt comfortable playing without a break, decision timeframes, everything. “Unity helps us get to a place where the player is totally absorbed by the gameplay and forgets about the mechanics,” said Roman.

Playkot then hired a team lead who had extensive Unity experience with graphics-rich games. “He was the mastermind, so we built a team around him. Everyone learned from him and his code, and we paid for anyone who wanted to take Unity courses,” said Roman.

The training didn’t take long. “After learning the basics, they would start working with updates and fixing bugs. All our developers have good general skills, so they learned quickly.” 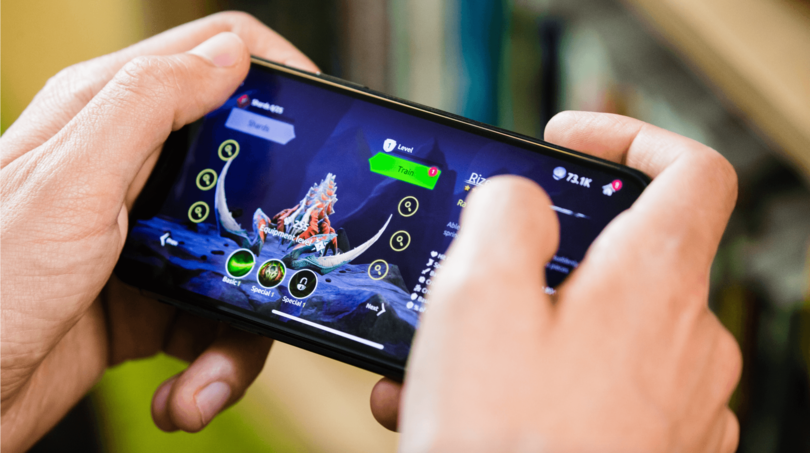 According to Roman, one of Unity’s strong points is how it lets developers focus on art and game design rather than technical aspects. “Some companies try to build technology showcases, using every possible shader and anything to look more cutting-edge. Not us. At Playkot, the art of game design is the biggest priority – that’s why we chose Unity.” Another important benefit was speed. “From brief to artist to production-ready, with Unity we can develop a character in four weeks, with complete testing and working out all the animations and visual effects. That’s pretty fast considering the level of quality we have.”

In 2014, SuperCity, made with Flash, won Facebook’s Best New Game Award, and SuperCity Mobile, released in July 2017, became Playkot’s first Made with Unity game. But again, Sasha, their CEO, was looking at trends rather than the status quo. Roman said, “Casual social games pick up lots of players, but they aren’t necessarily committed to the one game. With strategic RPG games, there are fewer players, but they are much more intense, and they tend to spend a lot on their gameplay. We love really sophisticated graphics, so we wanted to build games that showcased that and we also wanted to reach those intense, loyal players – that’s why we chose to diversify.” 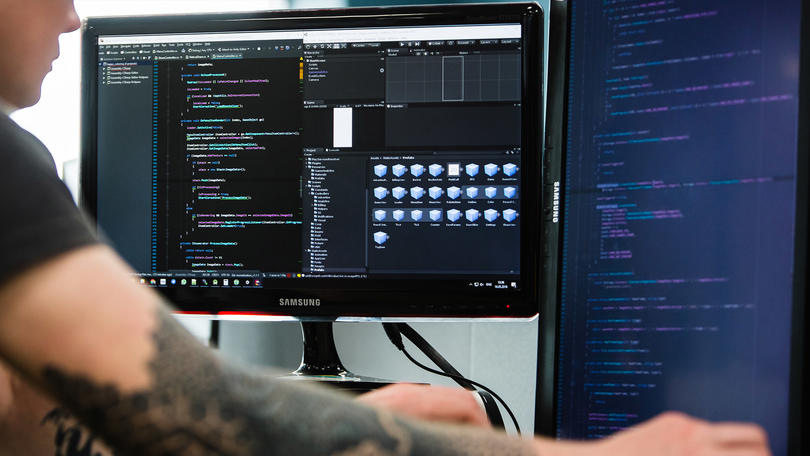 The Age of Magic is born

Game Producer Roman Zorin had been working on “a world torn apart by magic” since he was in school. At Playkot, he had developed a massively multiplayer online role-playing game (MMORPG) prototype, Portal, that he said was “ambitious, large-scale, and hardcore – and nobody at Playkot liked it.” He was convinced that the basic game elements were awesome: the heroes, locations, battles, and conflicts. “I realized I had to find the right mix.” After three internal hackathons, the team found the right mix, and Age of Magic was born.

“It took three people five months to prepare a comprehensive plan for the project. We then added four more developers, and after two months, we had a real vertical slice of the game to prove the graphics concept,” said Roman. The team grew to 12 and they started production. It then took five months to soft-launch the game and another three months for the hard launch on iOS and, five months later, on Android.

Playkot heavily leveraged Cinemachine, Unity’s unified procedural camera system, during Age of Magic development. “We had a limited time to show a huge magical world, integrate a plot, generate cutscenes with characters, dialogs, and animations. Cinemachine really simplified all our camera work, which gave us time to work on fine-tuning the art elements. That’s why Age of Magic is the best-looking RPG on mobile,” asserted Roman.

Few disagree, and today Playkot boasts nearly 7,000,000+ players (1M daily). In China it reached the Top 50 and Playkot is talking to some well-known Chinese publishers about continuing its growth in that market. Not surprisingly, Age of Magic is Playkot’s most lucrative game yet – making it easy for this dynamic and inspiring Russian studio to say that Unity is an important contributor to their ongoing success. 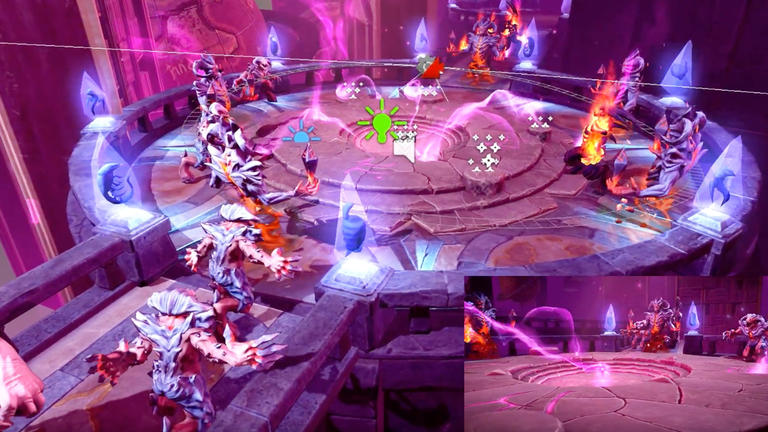 Watch this video for an example of how the studio uses Cinemachine cameras in both the Game view and the Scene view.

Cinemachine and Age of Magic

To create the many truly magical moments in the Age of Magic, Playkot deployed Unity’s procedural camera system, Cinemachine. From numerous perspectives and angles, the story unfolds through multiple virtual lenses, drawing players into the suspense and exciting gameplay. 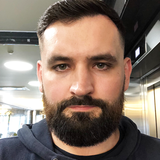 “Some companies try to build technology showcases, using every possible shader and anything to look more cutting-edge. Not us. At Playkot, the art of game design is the biggest priority – that’s why we chose Unity.” 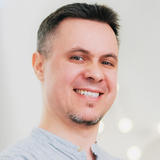 From brief to artist to production-ready, with Unity we can develop a character in four weeks, with complete testing and working out all the animations and visual effects. That’s pretty fast considering the level of quality we have.

“Unity helps us get to a place where the player is totally absorbed by the gameplay and forgets about the mechanics.”

“Unity includes all the tech tools we need to build the types of games we want to build. And we all think the Asset Store, with its thousands of game-ready resources, comes in very handy.”

“We had a limited time to show a huge magical world, integrate a plot, generate cutscenes with characters, dialogs, and animations. Cinemachine really simplified all our camera work, which gave us time to work on fine-tuning the art elements. That’s why Age of Magic is the best-looking RPG on mobile.” 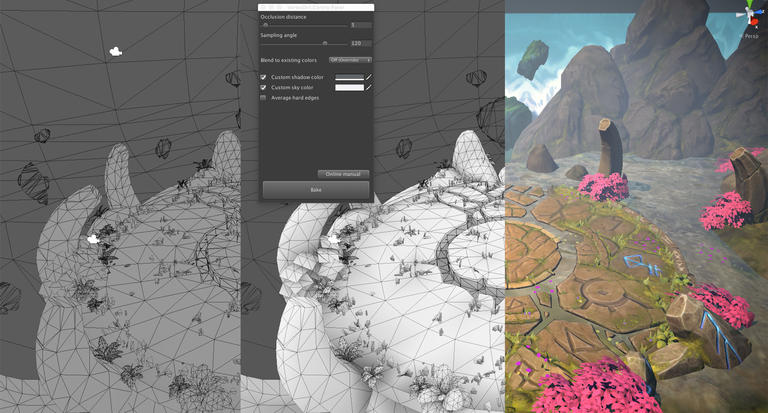 “Unity includes all the tech tools we need to build the types of games we want to build. And we all think the Asset Store, with its thousands of game-ready resources, comes in very handy.” – Roman Zorin, Game Producer, Playkot

One of the assets used during production was Vertex Dirt (Vertex Ambient Occlusion), which helped them convert from ambient occlusion to vertex colors.

Go to the Asset Store