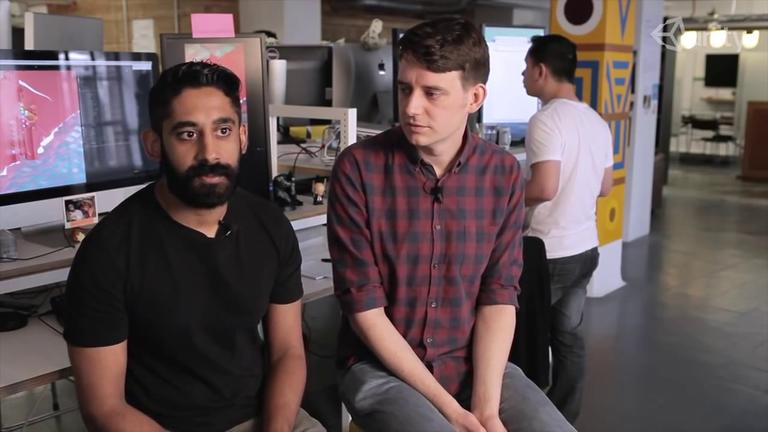 As video games continue to expand and evolve into new forms, so too does the spread of creators who inspire them. For multidisciplinary design agency ustwo, Dutch graphic artist M.C. Escher inspired work on its upcoming iPad game, Monument Valley. "Escher is great and popular because he found a way to describe geometric and spatial concepts through everyday elements like water, buildings and animals," says ustwo games lead developer, Peter Pashley. "I think what Monument Valley brings to the table is an exploration of how to bring an interactive, emotionally engaging experience to a wide audience through a set of simple mechanics and a world that feels at once familiar and fantastical." 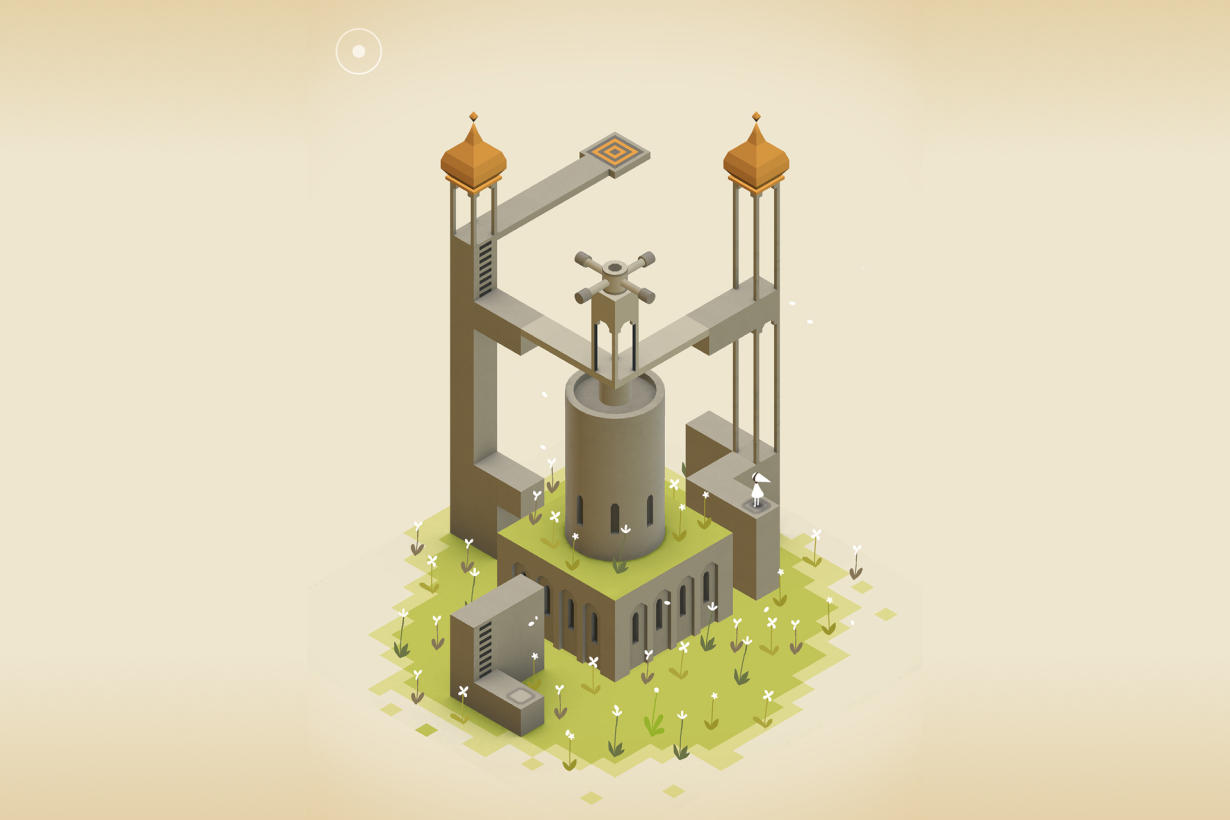 Indeed, the game's isometric worlds are dotted with familiar Escherian tropes: stairs and doors that lead to nowhere, paths that loop back into themselves or simply spiral into nothingness. It is at once beautiful and disorienting, and its elegant levels serve as the perfect canvases for a touch-based puzzle game. Players control Ida, the game's curious protagonist, through labyrinthine levels as she encounters obstacles ranging from the odd to the genuinely eerie, like the marching Crow People who hinder her path. 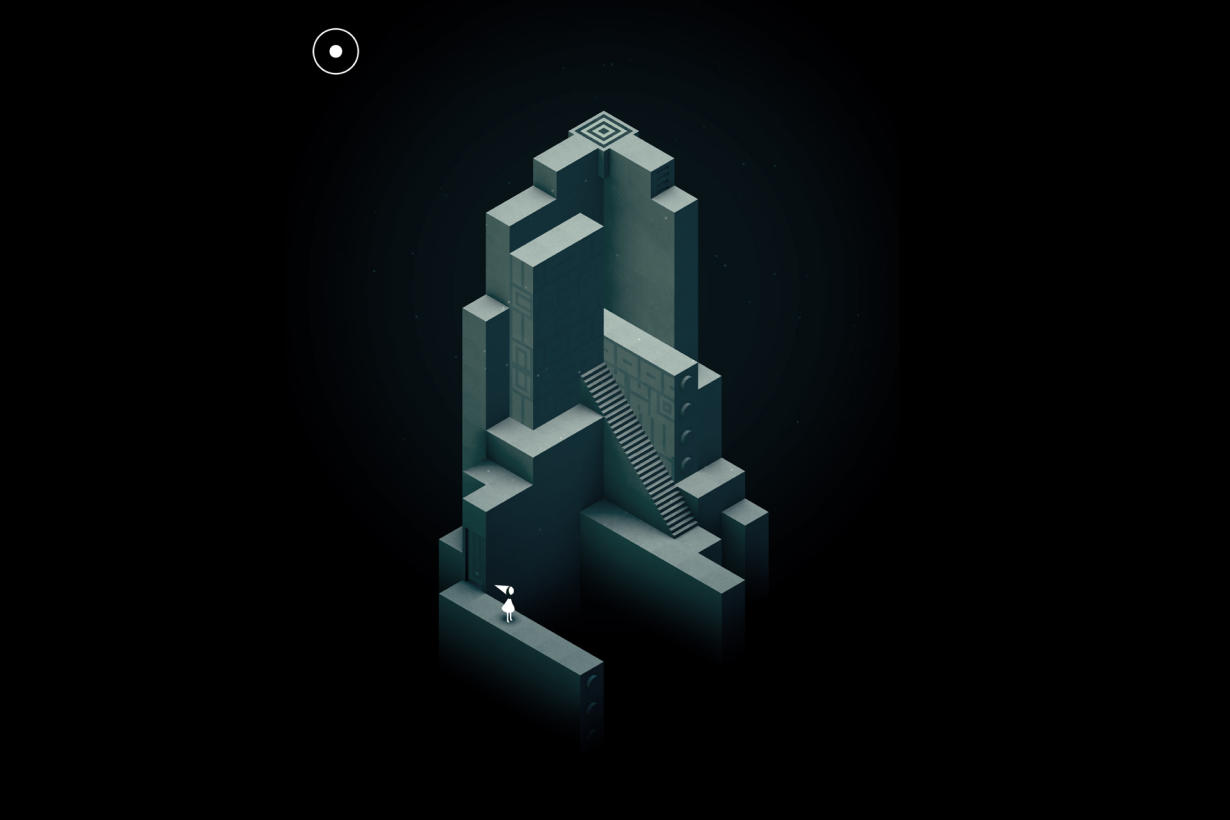 According to Pashley, Monument Valley as it looks today is very similar to the first piece of concept art the team came up with – but only arrived at that point after plenty of iteration. "Of course, we’ve experimented a lot on the way to get here. Being able to rapidly iterate the look inside the Unity Editor has been great, and we actually experiment in-game more than in Photoshop." He points to the art style and execution as perhaps the proudest point of his team’s creation, as it has managed to nail the "every screen an art print" look the team was after. "As tech lead, I'd have to say [I'm proudest of] the ease with which we can throw 'impossible' levels together; getting navigation and rendering to work automatically when the actual 3D connectivity is nonsensical has been interesting!"

Though ustwo is a creative agency that initially made its name outside of video games, it's also no stranger to the field. The studio's 2011 hit Whale Trail provided a taste of what game development was able to achieve. "Whale Trail's success has given us a strong motivational foundation to build upon, and watching the Twitter stream, even today, always perks us up," says Pashley. "It’s reinforced the belief in making games that really engage with people on an emotional level, and that all stems from our own emotions towards it – if you don't love it, don't build it." 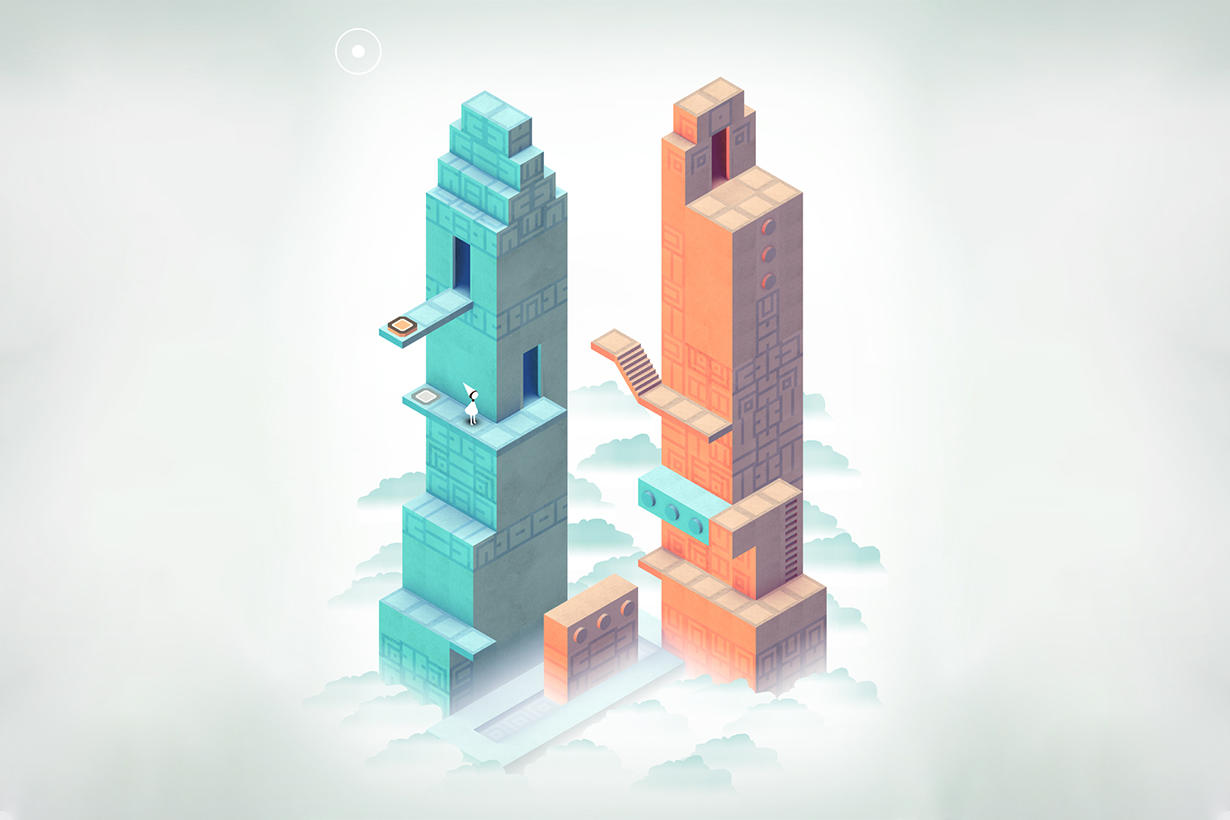 Still, ustwo remains informed by its work outside of games as well. "As a UI/UX studio, we have very high standards for the user experience, which rubs off on the games team in a few ways," says Pashley. "We obviously have a very high quality bar when it comes to artwork and visual design, but also we spend a lot of time user testing, observing novice players and making sure we see things through their eyes. It's great to be part of a larger studio which is working on other things – it helps to have enthusiastic but un-involved opinions available at any time." He says it can be tough, though, to tell people that no, they actually can't play the game because they need to preserve their freshness.

The team of six full-time developers decided on Unity to develop its idea early on. "We knew Unity would be a good fit because Monument Valley is all about creating beautiful places, and for that you need artists to be able to work directly with the world," says Pashley. "We cut our teeth on Unity while developing Blip Blup (having used an in-house engine for Whale Trail), so we were confident we knew our way around it. So it was obvious that the combination of ease-of-use for the whole team and easy cross-platform production was a winner." He points out that the game is actually fairly light on geometric complexity, so getting initial proofs of concept running was exceptionally easy: "We could do everything visually, and what you see is what you get."

The team has created a range of custom Editor scripts to support isometric development, as well as its own event system. Pashley points to Unity’s Profiler as a great resource for tracking down performance bottlenecks and leaks, and the studio is currently considering integrating the plug-in Fabric, which it intends to use to support complex, FMOD-like audio setups.

Pashley recalls early days on the project as being particularly inspired. "The first couple of months were great, as we continually discovered new possibilities for doing the impossible," he says. "Trying to figure out how to make navigation and rendering work in our impossible spaces has been a constant eye-opener, full of eureka moments when we managed to make the game understand human perceptual quirks. Especially entertaining was watching people passing by rubbing their eyes as they realize it's actually a ceiling that Ida is currently standing on." 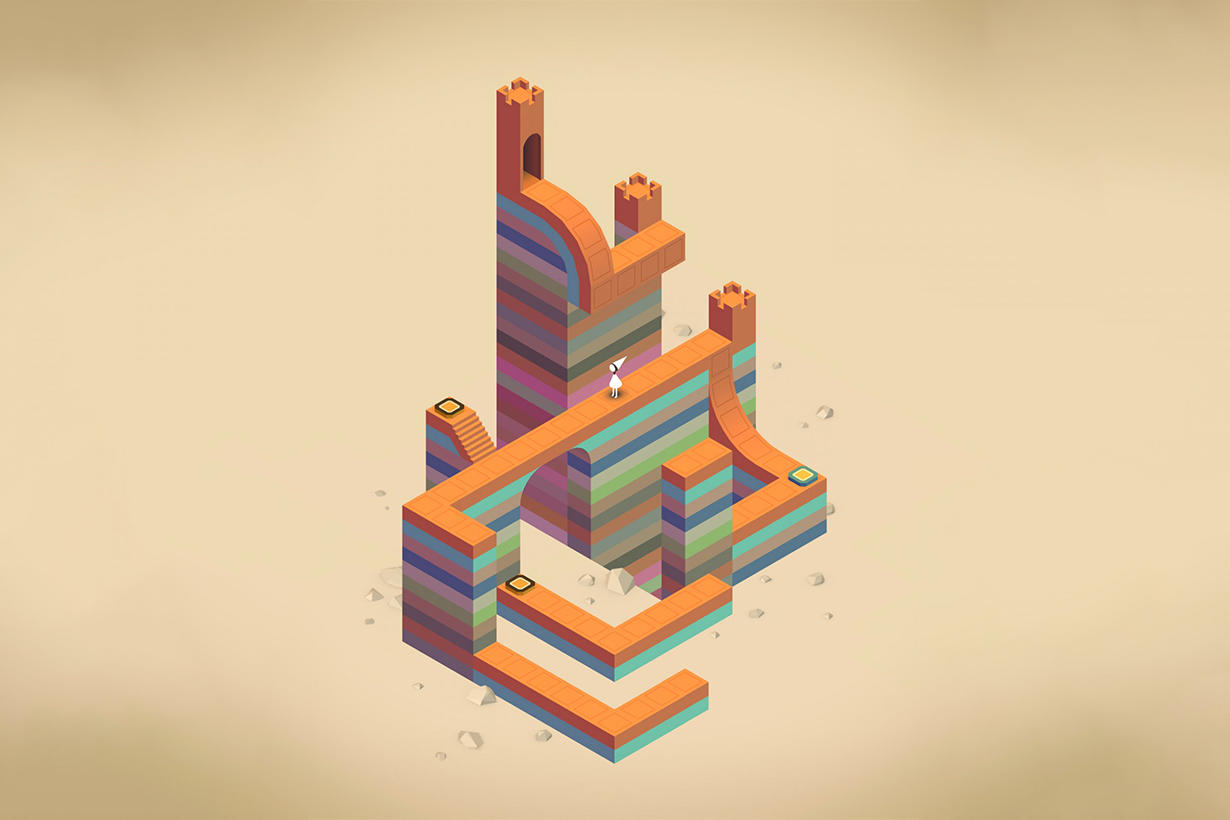 Of course, the rather baffling subject matter also presented its share of struggles, as it took the team months to figure out how best to design its levels. "It was hard for those not directly doing the iteration to understand why we had to keep throwing work away – we've probably discarded 10 times the number of puzzles as have made it through, and many a darling has been killed – but it was the only way to get to where we are now. The greatest difficulty has been finding our way to a place where we understand what we want out of a level, and having to throw so many ideas away in the process. You can’t force creative thought; it has to be given room to blossom, so if you have the luxury of having the time, then use it."

Monument Valley launches were released for iPad in Q1 2014. 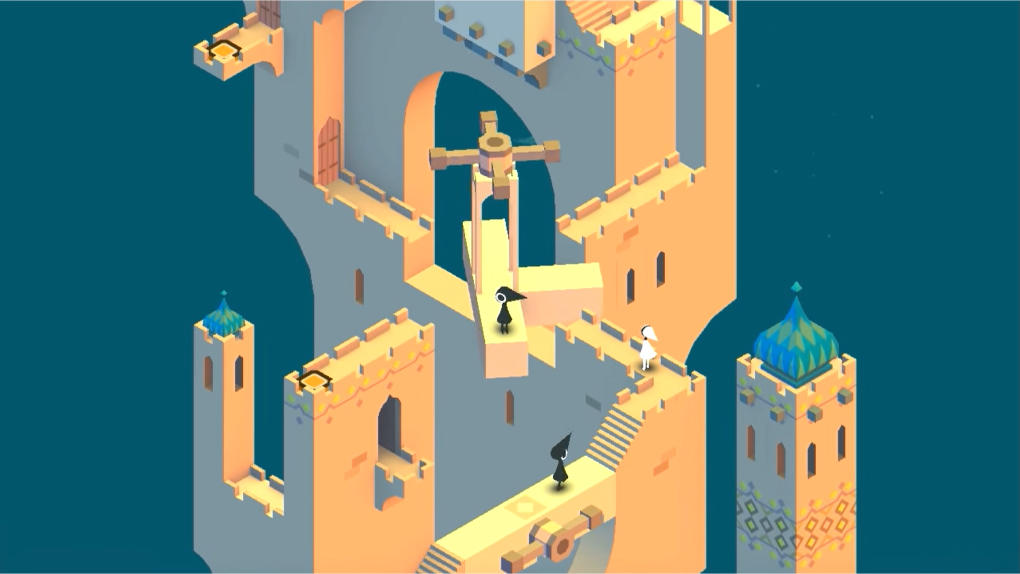 2D or not 2D? That is the question

And the answer? "Monument Valley is almost entirely 3D, and we put together a minimal UI system before Unity’s 2D tools were released," says ustwo games lead developer, Peter Pashley. "We're looking forward to digging into [the 2D tools] when we start prototyping again, though, after Monument Valley is complete."