How does Trivia Crack land on multiple platforms at once?

How does a highly successful studio decide to move from a dual-track, native-code development path to a single cross-platform tool? Founded in 2009, Etermax is a major studio best known for its spectacularly successful Trivia Crack game (Preguntados in Spanish markets), which has over 500-million unique players. Read on to find out why they consolidated their development on Unity.

5M downloads in a week is no trivial matter

When they were starting out, Etermax built iOS and Android versions of Trivia Crack in parallel, using native code for each. However, the overhead of maintaining multiple development tracks was considerable. Over time, the benefits of moving to Unity because of its “one code source, multiple outputs” strength, as well as its popularity with some of Etermax’s own developers and game-studio peers, gave them many great reasons to make the switch.

The many benefits of using Unity 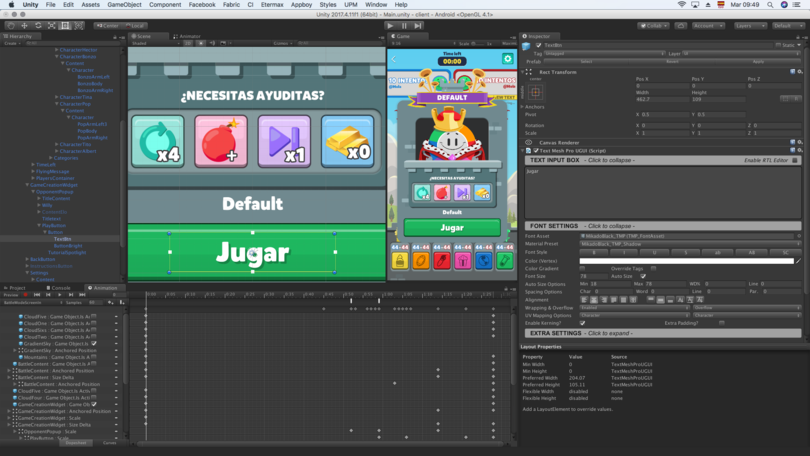 Their users love the Question Factory

CEO Maximo Cavazzani got Etermax started with a series of word games, the most successful of which – Aworded Crack (formerly Angry Words) – was the Apple Store’s Best Game of 2012. They also partnered with Mattel for a mobile version of Pictionary. “After three successful games, we started thinking about doing a trivia app, and Trivia Crack was born, launching in Latin America in 2013.”

But to sustain interest in a trivia game, there’s a huge challenge generating fresh content, especially localized content. “If you live in Mexico, for example, you don’t want the same questions as people who live in Spain,” Maximo said. Brainstorming inspired a unique approach: design the game to let regional users create content and contribute their own questions and answers. Named the “Question Factory,” this feature was hugely popular and Trivia Crack became Apple Store’s most downloaded app for 60 consecutive days starting in December 2014.

Due to this kind of success, Etermax has become the fastest-growing game development company in Latin America. And Cavazzani is quick to point out the reason for their phenomenal growth: “Etermax is not a gaming company – it’s a ‘great idea’ company.”

While the Trivia Crack iOS and Android versions launched simultaneously, Etermax’s development was completely divided, with one team using Xcode and the other using Android Studio. Etermax had to find talent with expertise for each platform, teams were never in phase, different bugs affected different platforms, and although the final products appeared nearly identical, they might as well have been built by two different companies.

In addition, features like the roulette wheel, which required haptic sensors, were hard to program in native code. Issues like these made Etermax consider leaving behind their native tools and adopting a new, cross-platform development platform.

According to Pablo Iacopi, Etermax’s Technical Owner, “We first tested libGDX, which was a good open-source library, but we were never sure about its compatibility. On the downside, it had a pretty steep learning curve and you had to piece together your own GUI.” They also looked at using React Native, which would let them build on top of existing platform-specific code and, for new elements, use a common logic layer and then export to different platforms. But this wouldn’t adequately unify development, which was Etermax’s primary goal.

Why they chose Unity

A number of Etermax developers had Unity experience, and Etermax was aware that Unity was an increasingly popular platform that a number of their industry peers had enthusiastically deployed. “Seeing that other companies had gone with Unity gave us a lot of confidence, and we trusted our own developers who recommended it, so we gave it a try,” said Gonzalo Huertas, Etermax’s VP of Engineering. In fact, their lead developer for Trivia Crack 2 was a Unity expert.

They developed some prototypes to test speed and performance, and the results were conclusive. Gonzalo noted, “For the developers with Android or back-end experience, moving to C# was quite simple, and for the other teams, the switch to Unity was also very straightforward. We chose Unity to streamline our processes. Instead of continuing to develop on two different code bases, we now have just one development workflow and now we can effortlessly output to many different platforms from the same code base.” In addition, Unity integrated design tasks so developers could later modify graphic elements without importing from other tools.

Importantly, switching to Unity enabled faster prototyping and smaller, more responsive teams, which fundamentally changed the company’s philosophy of game development. According to Pablo, “In the past, we’d polish a game as much as possible to produce a production candidate. Now, we make a minimum viable product (MVP) and then gather extensive metrics. That helps us create a much richer game.” 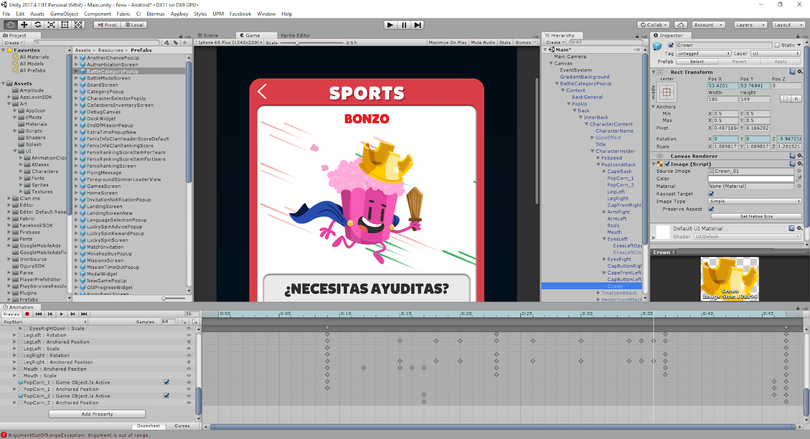 Many benefits from Prefab Assets and the Animation System

Working with Unity 2018.3, Pablo revealed that: “One very big Unity feature for us is being able to nest Prefab Assets because that simplifies building the visual interface considerably. And it’s not just for characters – we have a lot of common widgets in different scenes that we can update automatically.” By building a widget as a Prefab Asset, Etermax can make a single code change and update all the nested assets simultaneously. He added, “Unity’s ability to build a glyph atlas at runtime – its dynamic font feature – really helps us with Chinese and Japanese character sets.”

Dimensionally, Trivia Crack’s decidedly flat 2D design works. Picking objects is easier in 2D, screen locations are very accurate, and the entire UI feels clean and simple. Etermax leveraged the rich and expanding Unity Animation System, letting them animate 2D sprites, manage different clips, and use the rules/timeline to transition from one animation to another.

Despite Trivia Crack 2 being packed with most of the original game’s features and new game modes, it loads fast and feels instant. Pablo shared some of their tricks: “We started adding a lot of functionality to Trivia Crack 2 and suddenly the initial load went through the roof. That led us to investigate how Unity’s performance tools could help us. We started to measure what we were doing in that load, and basically now we distribute the game load only when and where it’s going to be used rather than indiscriminately loading everything all the time.”

The company actively shares its experiences and learnings with the Unity community. You can find articles about their Unity performance tricks and more in their Engineering team’s blog.

What’s next for this “great idea” company?

Etermax is planning to replicate the unified and streamlined workflow of Trivia Crack 2 into other company titles, many of which get millions of DAUs, and refactoring some of them with Unity seems to be in the plans.

Unity’s broad capabilities allow them to experiment with other game genres and diversify their catalog; some of these experiments are 3D games that feature their well-known Trivia Crack mascot.

And now that Etermax has streamlined and accelerated its development processes with Unity, that leaves just one non-trivial question for this trivia-loving studio: What new Etermax game are we all going to get hooked on next?

“We chose Unity to streamline our processes. Instead of continuing to develop on two different code bases, we now have just one development workflow and now we can effortlessly output to many different platforms from the same code base.” 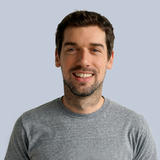 “One very big Unity feature for us is being able to nest Prefab Assets, which simplifies building the visual interface considerably. And it’s not just for characters – we have a lot of common widgets in different scenes that we can update automatically.”

“Seeing that other companies had gone with Unity gave us a lot of confidence, and we trusted our own developers who recommended it, so we gave it a try.”

“Unity’s ability to build a glyph atlas at runtime – its dynamic font feature – really helps us with Chinese and Japanese character sets.”